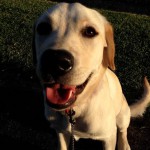 Bonnie’s Mum Natalie came into the clinic one evening to introduce us to her new 8 week old lab puppy Bonnie. While she was in on her social visit we gave her a quick health check and signed her up for 4 weeks free insurance with Petplan. As it turns out this was fantastic timing.

One week later little Bonnie was rushed to the Manukau Afterhours Vet Clinic vomiting and very unwell – typical Labrador had been eating things she shouldn’t. Bonnie had gotten into the wallpaper and glue!

Bonnie was brought into our clinic the next morning where she was given pain relief, put on IV fluids and had radiographs taken. These x-rays showed a lot of material in Bonnie’s very bloated gut.

As she was still quite bright we treated her conservatively, knowing there was a possibility that she could need surgical intervention but hoping that wouldn’t be the case. We gave her some BIPS (little beads of different sizes that show up on x-ray) and re x-rayed her the next day. These BIPS allowed us to see that the material in the gut was still moving along. Our biggest concern for Bonnie was an obstruction.

After 3 days in our care Bonnie began to pass the material in her gut. She recovered fully and was even well enough to attend our puppy classes.

The total cost of Bonnies wallpaper meal was $821.70 (this didn’t include her after hours vet clinic fee). After paying the excess to Petplan the total bill was covered.

Natalie was so thankful for her free insurance she has continued with the policy – and now wouldn’t be without it!! 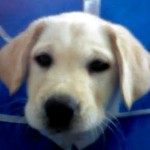 My blue cone of shame