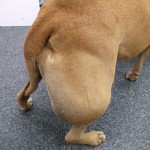 Zoe is a very young and spritely Boxer cross who had developed a very large fatty tumour in her right thigh.  The tumour had grown at an alarming rate, completely overtaking her entire leg!!  Her owners had been told Zoe would likely have to lose her leg as the tumour was so extensive.  As she was a very big and active dog they didn’t feel she would cope with only one hind leg and the decision had been made to put Zoe to sleep once she could no longer cope comfortably with the leg.

We met Zoe in early 2013 when that time was close at hand.  After much consultation with Zoe’s owners we offered to attempt a surgical removal of the tumour through two main large incisions on either side of her thigh.

So on the day she was destined for euthanasia, she instead went into surgery.

The surgery took over four hours and was very difficult as the tumour was underneath all the muscles of the thigh and was wrapped around her sciatic nerve and major blood vessels.

Zoe pulled through and was walking on the leg that afternoon – smiling her beautiful smile.  From this point she continued to make progress in leaps and bounds.

We cannot take all the credit however as  Zoe’s human family went above and beyond the call of duty with vigorous dressing changes, management of Zoe’s surgical drains and extensive post operative physiotherapy.

Zoe now has a very normal back leg, and can run, lie, sit and play to her hearts content.  Although a little scarred the leg is now virtually normal in every way. We are so thrilled to have helped Zoe enjoy her life to the fullest and be given a last minute respite. 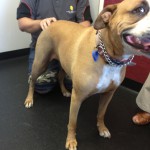 In late 2014 Zoe sadly passed away, 21 months after her big surgery. We will miss her wonderful smile and happy tail.